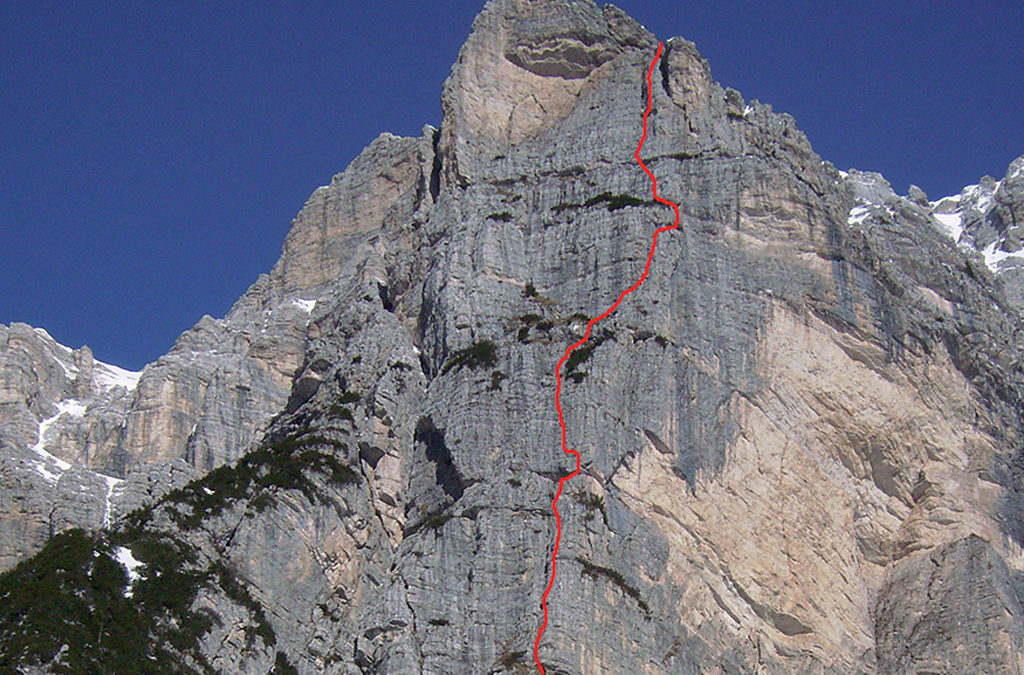 Wonderful itinerary, almost a classic, that crosses the prominent south spur of Pala del Belìa with an elegant climb on good rock. The ascent proposes very interesting passages, but it is characterized by several grassy ledges that make the climb so discontinuous and can be slippery in case they are wet. So be careful. The climb, being often run, is nicely bolted. For the easy parts, our advice is to bring some pitons anyway. For the variety of the passages and the good exposition to sun this climb is highly recommended, also in unfavourable seasons.

DESCENT
In order to come back from the top there are two alternatives. The first is to get to Ferrata Costantini crossing the large ledge towards west and go down along the ferrata. The second is to get down towards east going through meadows and rocky slabs, arriving in the couloir between Pala del Belìa and Pala del Bò. Crossing the couloir towards left you will get to the top of Pala del Bò (be careful in case of ice) and, going down through steep screes following a good marked path, you will get back to Rifugio Carestiato (1h) 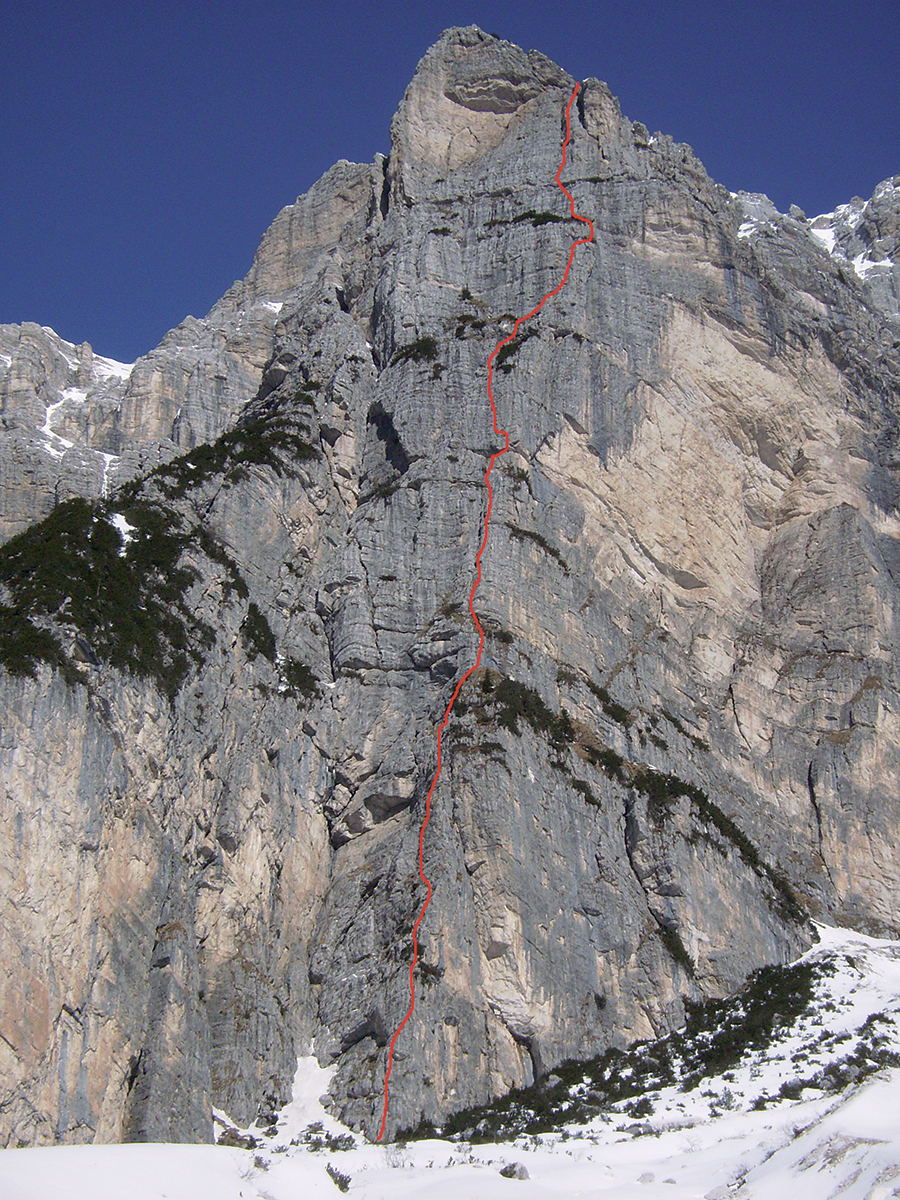 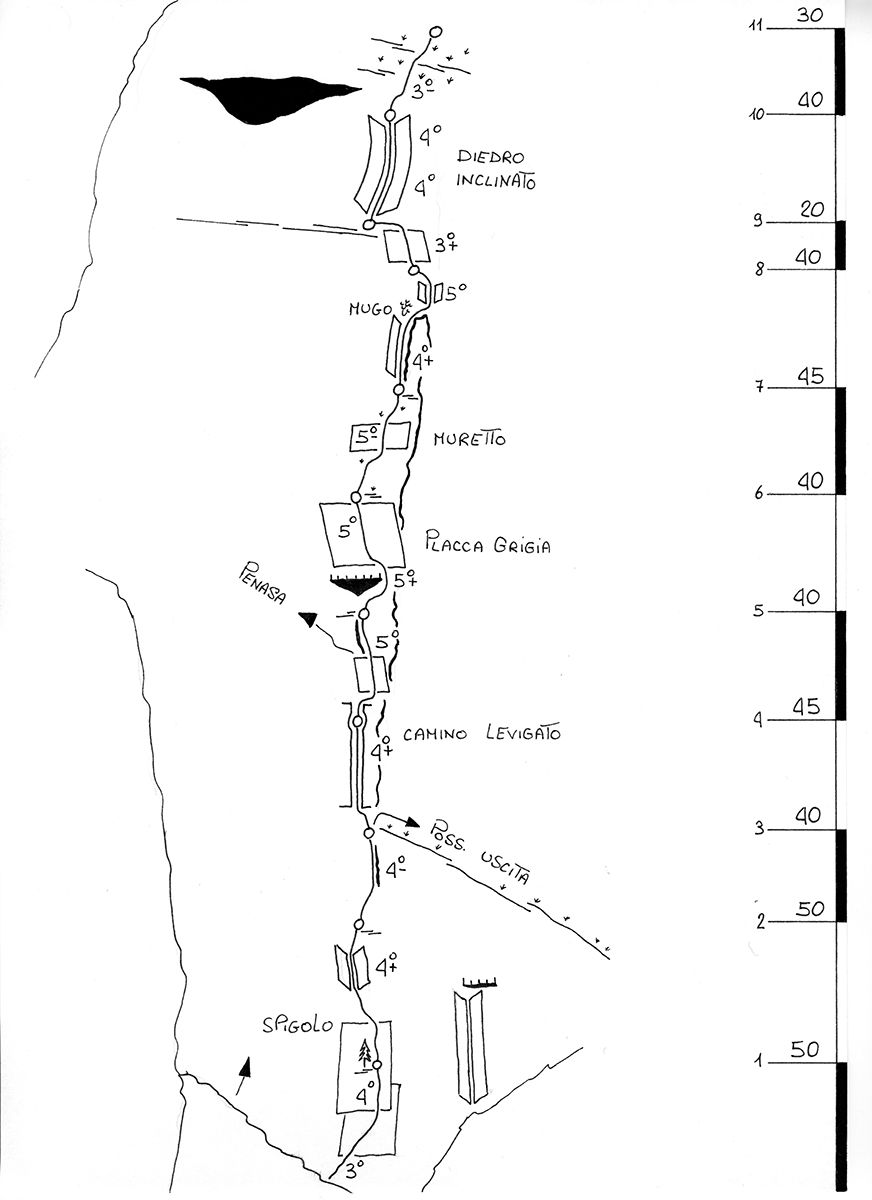 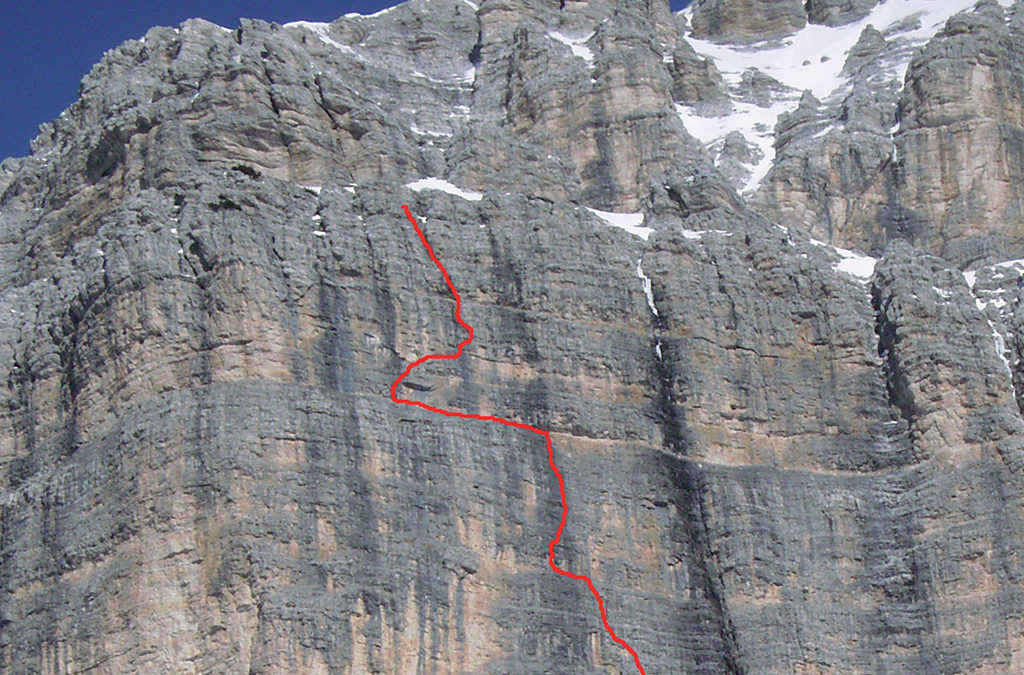 Classic itinerary, very nice and popular, that rises the harsh vertical slab wall characterized by two dark coulees that marks it. In terms of bravery, logic and beauty of the climb is surely one of the greatest climbs given by Gino Soldà. The south side of Pala delle Masenade, vertical and visually without subsidence points, inculcates still today to the climber an anxious sensation and profound respect. The climb is bolted: our advice is to bring some pitons anyway, in case of necessity. Pay attention in the final part (over the higher ledge) where it is easy to confuse the original path with the exit of the “Sergio Arban” and the “Marsanga” paths, sharply more challenging.

START POINT
At the center of the great rocky amphitheatre of Masenade, that forms a grey dihedral rightwise sloped.

DESCENT
Reached the large detrital upper ledge you will cross towards right getting to Ferrata Costantini, that rapidly brings back to Rifugio Carestiato (1h). Alternately, with a longer path, you can pass through the ledge towards left and go down along comfortable banks on the rocks of Scalet delle Masenade, with the track marked by red signs (2h to Rifugio Carestiato). 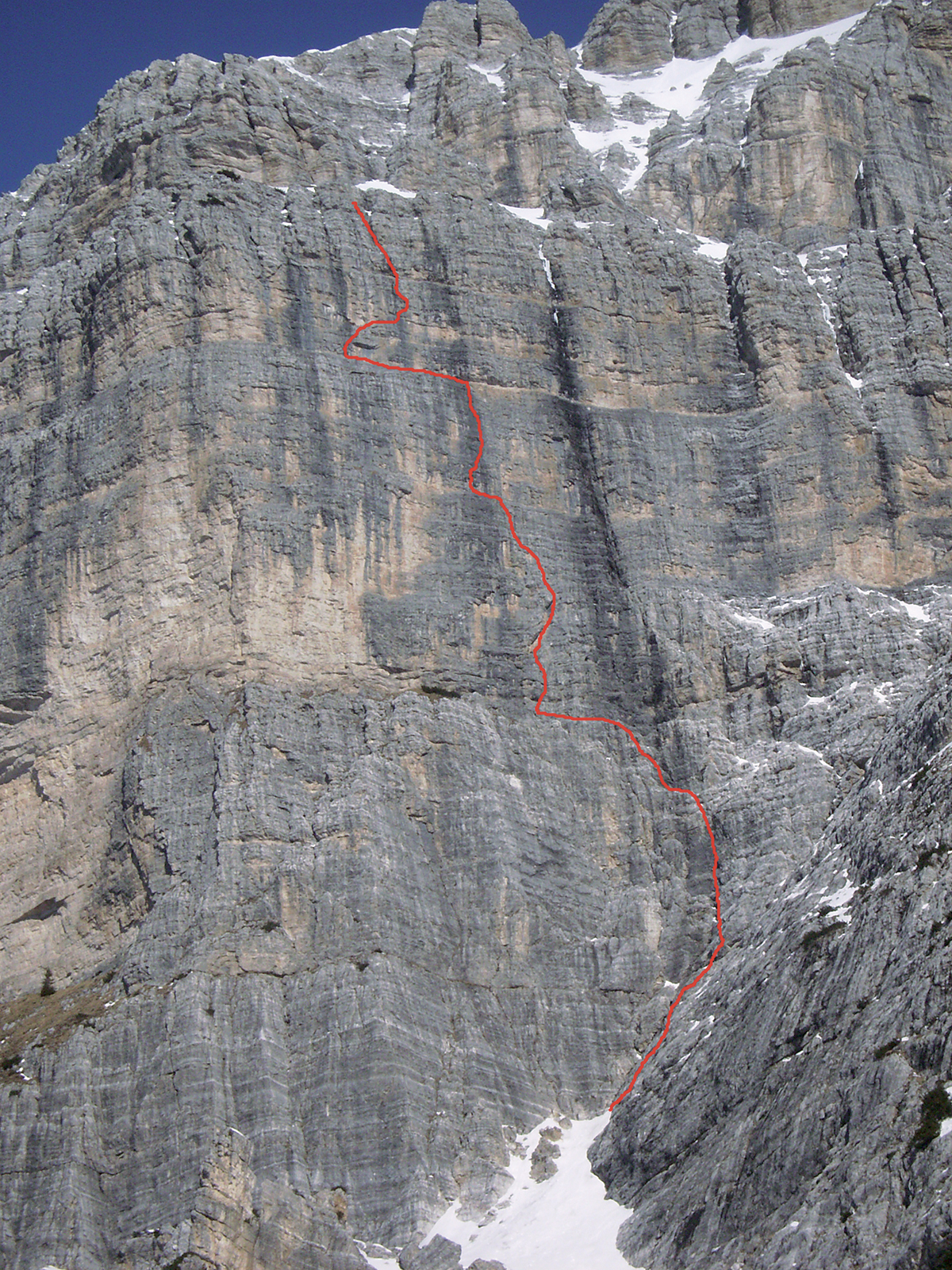 Beautiful itinerary, now classic, which runs along the evident southern edge of the Pala del Belìa with elegant climbing on excellent rock. The climb has very interesting passages, but unfortunately it is characterized by several grassy ledges that make the climb a bit discontinuous and can become slippery if they are wet. Therefore pay attention. The climb, being traveled frequently, is well equipped. For the easier sections, however, it is advisable to have a few nails. Due to the variety of passages and the beautiful exposure of the face to the sun, the route is highly recommended and can be visited even in the most unfavorable seasons.

ACCESS
From Rif. Carestiato, following the flat path that leads to the start of the Ferrata Costantini, you go to the base of the rocks, with an obvious path, going up an easy grassy slope you quickly reach the start of the climbs (0.20 h).

connection
Exactly a few meters to the left of the south corner.

DESCENT
There are two alternatives to descend from the summit. The first is to reach, crossing on a large ledge towards the west, the Ferrata Costantini and go down through it. The second is to go down towards the east through meadows and stone slabs, moving into the gully between the Pala del Belìa and the Pala del Bò. Crossing it to the left you reach the top of Pala del Bò (be careful in case of ice) and, descending the steep scree with an obvious path, you return to Rif. Carestiato (1 h).

Classic itinerary, very beautiful and popular, which climbs the severe vertical slab wall characterized by two dark flows that completely mark it. In terms of audacity, logic and climbing beauty it is certainly one of the greatest ascents left by Gino Soldà. Even today, in fact, the south face of the Pala delle Masenade, vertical and visually without points of failure, inspires the mountaineer who faces it a feeling of anxiety and profound respect. The climb is currently aided, however, the advice is to have some pegs with you just in case. Pay attention in the last stretch (above the high ledge), where it is easy to confuse the original itinerary with the exit of the clearly more demanding "Sergio Arban" and "Marsanga" routes.

ACCESS
From Rif. Carestiato following the Alta Via n. 1 towards Rif. Vazzolèr, in a few minutes you can reach the long scree that descends under the wall. Following the latter with difficulty, with an obvious trace, you can easily reach the base of the Pala delle Masenade. A large landslide that broke off from a forepart in the autumn of 2010 broke down the scree, inquire at the Carestiato Refuge on the feasibility of this access. Alternatively, go up the Ferrata Costantini then traversing with some difficulty at the base of the Pala delle Masenade (0.40 h).

connection
At the center of the large rocky amphitheater of the Masenade which forms a gray dihedral tilted to the right.

DESCENT
Reached the large upper detrital ledge, cross to the right reaching the Ferrata Costantini, which quickly takes you back to the Carestiato Refuge (1 h). Alternatively, with a longer route, you can traverse the ledge to the left and descend by comfortable banks on the rocks of the Scalet delle Masenade with a track highlighted by red stamps (2 hours to Rif. Carestiato).